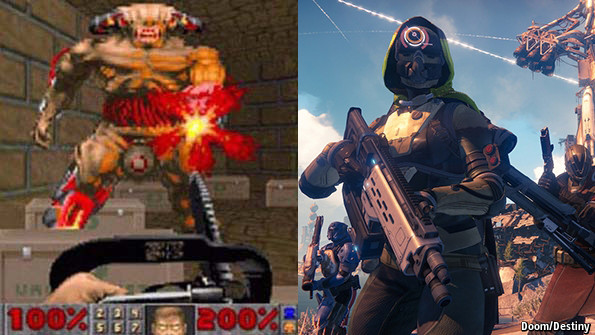 WHEN Activision, a big games publisher, released “Destiny” on September 9th, it was not just covered in the gaming press. Many newspapers commented on the game’s eye-watering budget, reported to be around $500m. How could a video game cost half a billion dollars to make? The truth is, it didn’t—Activision hopes that “Destiny” will become the first game in a long-running franchise, and $500m is the amount the firm has set aside to make that happen. But game budgets are, nonetheless, swelling. Developers and publishers are coy about releasing specific numbers, but budgets of tens of millions of dollars are not uncommon. The biggest, most polished games can cost hundreds of millions. “Star Wars: The Old Republic”, an online game released in 2011, is reputed to have cost between $150m and $200m. “Grand Theft Auto V”, which came out two years later, reputedly cost $265m. These are numbers on the same scale as blockbuster Hollywood films. Why have games become so expensive to make?

One reason is Moore’s law. Computer graphics have come on enormously in the past 20 years. The picture above compares the graphics of “Doom”, a seminal shooter released in 1993, developed by a handful of friends, with those of “Destiny”, which was developed by Bungie Software, a firm that employs around 500 people. With a few exceptions (such as “SpeedTree”, a piece of software that automates the creation of realistic-looking trees), all of the art in a video game is hand-crafted. As characters, items, levels and visual effects have become more intricate and detailed, developers have had little choice but to throw more and more artists at the problem. Another reason costs are rising is the increasing professionalism of the industry. These days, Hollywood actors are hired (and paid handsomely) to voice characters. The biggest developers market-test their products to destruction. Like political parties honing a slogan, they offer snippets of gameplay to focus groups. If anything is found to be too difficult, too obscure or simply not fun, it is sent back to be re-done. That kind of quality control costs serious money.